A Holiday-Inspired Look Back: When Human Nature Met Michael Jackson " "

A Holiday-Inspired Look Back: When Human Nature Met Michael Jackson

One of the underrated, magical qualities of Christmas time is its ability to heal old wounds—if only for a moment—and help us recognize the very best in those around us… the things that made us love and appreciate them long before life’s complexities blurred the picture. This usually is a phenomenon you experience on a personal level, but sometimes, it applies to our perspectives of certain world famous celebrities, as well.

Considering all we now know about the late, great Michael Jackson—his difficult upbringing as a child performer, the international superstardom of the Thriller album (which happened to include a song called “Human Nature”), his later physical transformation and legal controversies—none of it seems to matter when we hear The Jackson 5 sing “I Saw Mommy Kissing Santa Claus” on our holiday radio station. The happiness of the song, and the spirited voice of a young MJ on lead, is like a pristine artifact. It transcends our idea of “The King of Pop”—whether we loved him or loathed him—and simply leaves us with the comfort of a single joyous, genuine, and simple moment in time. No matter what, there was always the joyous, perfect music. Image from wikimedia.com

For our friends in Human Nature, the experience goes a layer deeper than that. As some of the group’s newer fans may not be aware, Andrew Tierney, Michael Tierney, Phil Burton, and Toby Allen are among the very few people in the world who can say they shared a stage with Michael Jackson. And not surprisingly, their time as an opening act on the 1996/97 HIStory Tour left an indelible mark. Here’s how Andrew Tierney recalls it.

“Well, it was amazing. It’s something that happened right at the beginning of our recording career. Sony was trying to launch our first album and there was this opportunity to submit to be the support act for Michael Jackson when he toured Australia. So we got put up for that position, and Michael’s management and record company agreed to have us on the bill.  And I guess we endeared ourselves to them, because we got to be part of the European tour, as well. 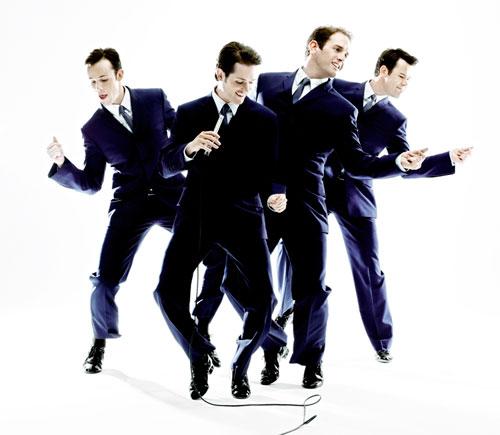 The boys showing what it feels like to tour with Michael Jackson.
Image from auspop.blogspot.com

“So as you can imagine, this was just an incredible experience for us. To be these young guys that were just starting a more serious entertainment career, to be able to watch a true master of showmanship every night. You know, we got to see how the show was put together, what a show of that scale was like, even the little nuances of how to build a show dynamically, from the way he opened the show to the quiet moments after a big dance number. So we were kind of like sponges sucking up all that—consciously and unconsciously, just experiencing it all. It was amazing, and maybe even more amazing looking back on it. Like you said, who gets to do that? And we did! So it was pretty crazy times. And we’re just thankful that we got the opportunity.”

Of course, even after touring the world and playing massive stadiums together, the guys in Human Nature would hardly they say they overcame the Michael Jackson “mystique.” They weren’t the groomsmen at Jackson’s surprise wedding to Debbie Rowe—which incidentally took place in Sydney during the same tour. Nor did they get to sing with him live on stage. In fact, it was several months into the tour before they even got to speak with the notoriously reclusive megastar.

“We wound up meeting him before the third-to-last show, I think, onstage,” Phil Burton recalled in a 2011 interview with Nevada radio station KUNV, noting that the whole encounter lasted a matter of minutes.

“We had a photo taken — never seen it [laughs]. He said he loved our show and loved what we did, and that was it. But it was amazing walking out onstage and seeing all of the little stage marks saying ‘Thriller’ and ‘Billie Jean,’ and getting to watch that show up close so many times was really cool.”

A pair of icons in London.
Image from examiner.com

Thanks in no small part to the exposure and lessons learned on the HIStory tour, Human Nature was soon well on its way to a long, successful recording career of their own. And while they may not technically have known the “real” Michael Jackson any better than the rest of us, they did forge a bond of mutual respect—which can really put things in perspective. For all his greatness, all his strangeness… this was still the kid who sang “Santa Claus is Coming to Town” in those Motown days of yore. And there is something objectively, unashamedly legendary about that.

Now if only that elusive photograph would resurface!

One response to “A Holiday-Inspired Look Back: When Human Nature Met Michael Jackson”

Clowns, Maybe, but No Tears: How Human Nature got Smokey Robinson’s Stamp of Approval «