It’s a type of question usually relegated to record store counters and online message boards: “If you could curate your very own music festival, who would be the three headline acts, and what venue would you choose?” Now, for most of us, a fantasy scenario like that is purely the stuff of which dreams are made. But for professionals like Human Nature, who’ve personally shared stages with the likes of Smokey Robinson and Michael Jackson, talking about the music artists to include on an “Ultimate Concert Lineup” is actually pretty serious business.

Enter Phil Burton and Toby Allen. As fifty percent of Human Nature, they’ve grown from wide-eyed teenage fans of pop and R&B music to platinum-selling success stories in their own right—traveling the world and performing alongside other wildly talented artists from Brisbane to Boston. After 20 years, it can sometimes be difficult to separate the “professional” side of the music experience from that initial “fandom” that inspired them in the first place. But rest assured, it’s always there. And both Phil and Toby still listen to music—new and old—every bit as much as they perform their own. 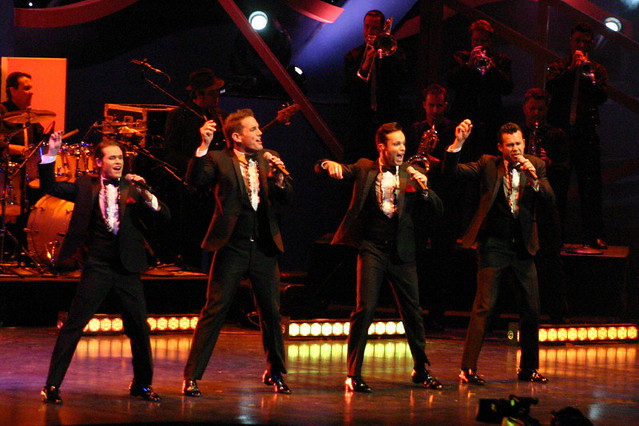 Human Nature have gained quite a following in their own right, but have some ideas of music artists they would include in their dream concert lineups.
Image source: Flickr user jeaneeem

So, if we ask Mr. Allen and Mr. Burton to put on their fan hats and imagine themselves not as the international star performers they are, but merely as fans in the crowd– wishing to see their own personal favorite artists together on one stage, for one night only… who would they select for that dream bill?

“Okay, my three headliners,” says Phil Burton, pausing for either dramatic effect or extra thought, “would be Queen… Bruce Springsteen… and INXS. All because they were—or are– so incredible live. Queen is probably my favorite band, but I never got to see Freddie [Mercury] perform, so that would just be awesome to experience. … Now, the twist would be that this show would take place in a club that could only fit about a hundred people maximum. So, just imagine those three acts playing their biggest hits right in front of you. Wow.” If it’s not already obvious at this point, one of the great things about curating the Ultimate Concert Bill is that the rules of time, space, and physics need not apply. As a result, in Phil’s show, you’d be getting Queen, INXS, and The Boss all in their prime—and needless to say, you’d be resurrecting the members of all three bands whom we’ve lost in recent years.

In the case of Queen, that means Ready Steady Freddie back on the microphone in all his glory, belting out “Bohemian Rhapsody” and “We Are the Champions.” Springsteen would have the full backing of the original E Street Band, with the “Big Man” Clarence Clemons on the sax as the group tears through “Tenth Avenue Freezeout,” “Thunder Road,” and “Born to Run.”

For some, Phil’s choice of INXS as the third act might seem surprising, but keep in mind that he’s talking about one of the all-time most successful bands from his native Australia—a group that dominated the charts around the world in the 1980s with hits like “Need You Tonight,” “Devil Inside,” and “New Sensation.” INXS’s original, hypnotizing frontman Michael Hutchence tragically died in 1997 (at just 37 years of age), but in this fantasy festival, he’s back with the band, putting on an electrifying show as only they could.

Pretty much the only hard thing to imagine with Phil’s line-up is the actual sequence of performers, because it’s hard to say that any of those acts is an easy one to follow.

Now it’s Toby Allen’s turn. Which three music artists would he choose for his fantasy concert, and what might separate a Toby Allen curated festival from some of the other popular music fests around the globe?

“I would love to gather Ray LaMontagne… Sharon Jones & The Dap-Kings… and Sting,” Toby says. “Of those, I have only ever seen Ray live, so the choice of the other two is purely selfish really. …As far as venues go, I see no reason for this not to happen in my backyard—which I guess would also be the factor that would separate it from other music festivals. I mean, we are talking ridiculously intimate!” Sting is a favorite of many music lovers, including Human Nature’s Toby Allen.
Image source: Yancho Sabev via Wikimedia.org

When it comes to the invitees to Toby’s “Backyard Bonanza,” everyone will likely recognize the name Sting (which is 50% easier to remember anyway, thanks to the lack of a last name). The former frontman of the British new wave band The Police has gone on to a successful 30 year solo career, topping the charts with songs like “If You Love Somebody Set Them Free,” “Fields of Gold,” and “Brand New Day.” Latter-day Sting has moved beyond his early punk/pop/reggae roots to explore a variety of world music, but he also wasn’t above joining forces with The Police again a few years back for some hugely successful reunion shows. Even at 62, Sting can still sell out a stadium—so a backyard is no sweat.

So what about those opening acts on the Toby Allen bill? Well, Ray LaMontagne is a 41-year-old folk rock troubadour who has built a strong following since his debut album Trouble was released in 2004. Powered by the popularity of that record’s title track (which was even sung by contestants on American Idol), the New Hampshire-born LaMontagne began earning kudos for his passionate, Van Morrison-esque vocal style and insightful songwriting. He’s released five albums now in total, winning a Grammy award for Best Contemporary Folk Album in 2010 for God Willin’ & The Creek Don’t Rise. The reclusive fellow doesn’t give many interviews [your humble blog writer must admit he had the rare privilege of chatting with LaMontagne back in 2006], but he ought to be a great lead-in to Toby’s second band on his bill, Sharon Jones and the Dap-Kings.

More devoted to the soul, funk, and R&B traditions of Stax Records than Motown, Sharon Jones and her Brooklyn-based band have been keeping the spirit of that classic sound alive since their formation in 1996.

From a commercial standpoint, the Dap Kings’ biggest claim to fame might be serving as the back up on Amy Winehouse’s hugely successful soul revivalist record Back to Black in 2006. But for all of Winehouse’s undeniable talent, she never had a thing on Sharon Jones. Now 58, Jones spent decades trying to find her niche as a singer, but it wasn’t until 2002’s album Dap Dippin’ with Sharon Jones and the Dap-Kings that her Aretha-meets-Tina-Turner voice finally earned its due credit and praise from fans and critics alike. Toby Allen, clearly, was one of them, as his love for this energetic band has them in some elite company.

2 responses to ““My Ultimate Concert Lineup”: Human Nature’s Phil & Toby Name the Music Artists They’d Most Love to See Live in One Show”

Human Nature Motown Show in London Rescheduled for May 2015 «